No, not that one, but the ‘F’ word I’m thinking of is almost more taboo in modern life than than its four-letter relation: 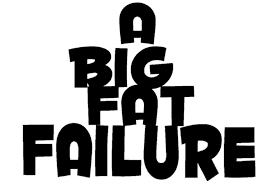 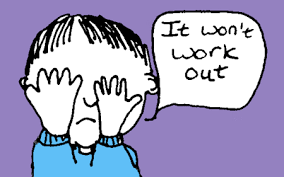 We are programmed in today’s culture to believe anything is possible as long as we really want it, we work hard for it, and we believe we can have it. The responsibility is all ours – if we want it enough, it will happen. If we fail, it’s our fault and a major embarrassment.

Perhaps it’s because I’ve been struck down with a major dose of inertia recently (this is my first blog post for nearly two weeks) that I was taken by a post from Anthony Wilson, a poet and writer, with some interesting things to say about failure, and its particular relationship to writing. In it he quotes Anne Enright:

I have no problem with failure – it is success that makes me sad. Failure is easy. I do it every day, I have been doing it for years. I have thrown out more sentences than I ever kept, I have dumped months of work, I have wasted whole years writing the wrong things for the wrong people. Even when I am pointed the right way and productive and finally published, I am not satisfied by the results. This is not an affectation, failure is what writers do. It is built in.

Wikipedia defines failure as: Failure is the state or condition of not meeting a desirable or intended objective, and may be viewed as the opposite of success.

So, is it as simple as the opposite of success? Anne Enright says it’s built in for writers.  And as I wrote in my little book ‘A Writer’s Alphabet‘: When you’re a writer, you don’t opt only for a solitary life with your laptop or notebook as your main companions. You also choose a life with rejection and disappointment (failure) guaranteed.

But it’s not only the big failures when your novel bombs, when your story isn’t accepted, when you don’t make the longlist – or if you do, you don’t make the shortlist. It’s in every sentence, every word you write. The prose you dream of in your head never survives intact on the page. Too often it seems turgid, banal, foolish.

I had a student in one of my classes once, who, when I suggested she discussed a piece of her writing with the person next to her to see if there were ways it could be improved, said: ‘I don’t need to. I wrote it like that because that’s the way I want it to be.’ Needless to say, we didn’t last long as tutor and student.

I think it’s the feeling of failure that our writing refuses to live up to our dreams that keeps us trying. What keeps us striving to produce our best post possible work. It’s not the opposite of success, it ‘s part of the process in being a writer. As Samuel Beckett, in one of my favourite quotes ever, says: Ever tried. Ever failed. No matter. Try again. Fail again. Fail better.